Rockwell spent between April and June of 1968 working on The Right to Know. That same year, America witnessed the assassinations of Martin Luther King, Jr. and Robert F. Kennedy, an escalating war in Vietnam, and the tumultuous election which brought Richard M. Nixon to the White House. A reflection of Rockwell's personal beliefs, The Right to Know illustrated an editorial which advocated for government transparency in light of the growing opposition to the Vietnam conflict.

Norman Rockwell
New Kids in the Neighborhood (Negro in the Suburbs, Moving Day), 1967 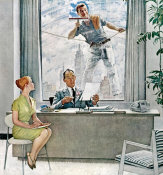