Story illustration for Look, June 14, 1966. Rockwell repeated the simple and powerful style used in Freedom of Worship to commemorate the fifth anniversary of the Corps. During his 1960 presidential campaign, John F. Kennedy proposed the idea of a volunteer organization of trained people who would be sent to developing nations in Africa and Asia to assist villagers in educational and agricultural projects. In 1961, the program, which Kennedy hoped would promote understanding between nations, was officially instated. 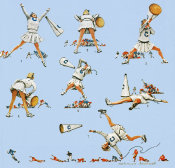