The Four Freedoms were a phenomenal success. After their publication, the Post received 25,000 requests for reprints. In May 1943, representatives from the Post and the U.S. Department of the Treasury announced a joint campaign to sell war bonds and stamps. They would send the Four Freedoms paintings along with 1,000 original cartoons and paintings by other illustrators and original manuscripts from The Saturday Evening Post on a national tour. Traveling to 16 cities, the exhibition was visited by more than a million people who purchased 133 million dollars in war bonds and stamps. 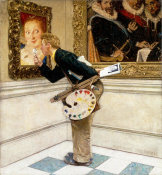 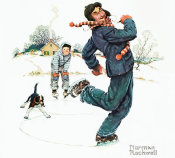 Norman Rockwell
Grandpa and Me: Skating, 1948 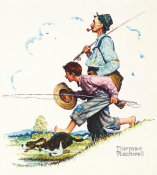 Norman Rockwell
Grandpa and Me: Fishing, 1948