"I like to do a picture which, instead of depicting a single incident or a single moment in time, traces the course of an action over a period of time. Here one can see that the salesman got out of his car, took off his clothes but not his shoes, spread a newspaper on the grass and laid his glasses on it: then, at the water's edge took off his shoes, waded in, and just before submerging, carefully laid his lighted cigar on his shoe, ready to be puffed the minute he emerges from the stream."
Norman Rockwell

Featuring a 1935 Ford V8, the Fords Coupe's price, style and V8 engine made Fords enormously popular with those who relied on their cars for work and play.

Norman Rockwell
Beerman (Man with Sandwich and Glass of Beer), 1941 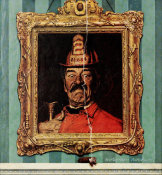 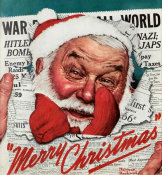